A Jewel of Italian Baroque

Andrea Pozzo’s biggest challenge was undoubtedly the fake dome that made him famous. It earned him commissions in many cities in Italy and abroad. Using just the laws of perspective, the artist succeeded in transforming a barely-curved barrel-vaulted part of the roof into a vertiginous work that multiplies and amplifies real space. It must have been difficult to connect the physical wall sections with the illusory part. Pozzo painted four plumes to simulate the imposing vault, inside which female personifications of the then known continents were positioned – EUROPE, AMERICA, AFRICA, ASIA. It was a direct reference to the power of the Jesuit order and its spread throughout the world. Above these is the octagonal dome and then, on double protruding corbels, columns which are identical to the real ones below. Behind these are serliana windows alternating with simple arches, all framing a clear boundless sky. This imposing and majestic architecture is full of heavenly characters who have come to pay homage to the saint. On the balconies and above the architecture, angel musicians appear to announce the glory of St. Francis. Other angels bear him during his ascent. His gaze is distant, towards the infinite. Infinitum … the Saint has already reached it and is in contemplation.

Andrea Pozzo and the Triumph of Illusion

A lay member of the Jesuit Order, Andrea Pozzo was a famous architect, painter and essay writer. After entering the College in Milan as a young man, he quickly demonstrated his exceptional creative talents by creating temporary settings (sacred scenes for special church occasions) for the canonisation celebrations of St. Francis Borgia (in Milan and Genoa). The Mondovì creation marked a real turning point in Pozzo’s artistic career as he moved from short-lived works to great decorative masterpieces. It was an ambitious project and the task was both arduous and demanding. After just two years’ labour, it was completed. The result was astounding and gave this promising painter much fame. He soon had much work at important locations, both in Italy and abroad. His works in Rome are famous and include the magnificent Saint Ignatius Chapel vault and the anamorphic corridor in the Church of the Gesù. At the beginning of the eighteenth century, he received an invitation from Leopold I, followed by equally intense activity in Vienna, where he died in 1709. As well as his illusionistic ‘fake domes’ and anamorphic frescoes, he made numerous altarpieces. Finally, the Treatise “Perspectiva pictorum et Architectorum” reveals his great optical and perspective proficiency. It gives practical advice and “tricks” on using perspective. 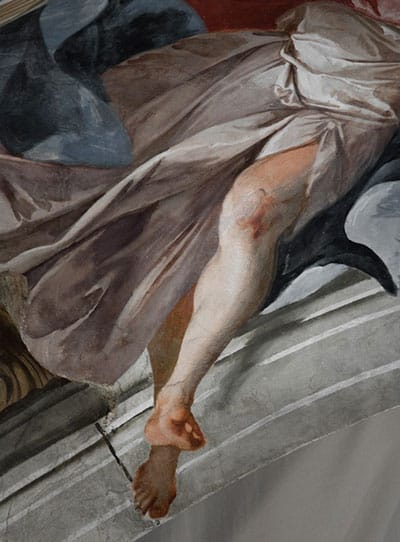 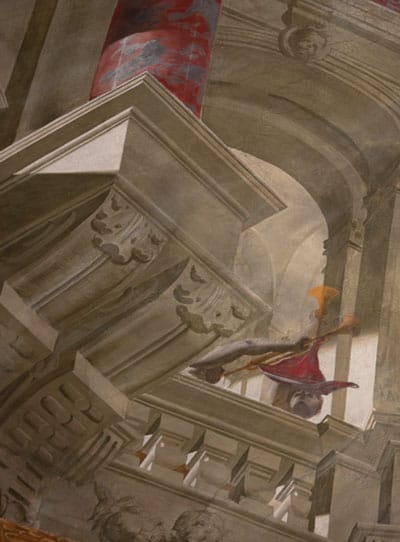 The machine can best be described as something between a traditional altarpiece and a theatrical scene. This kind of contraption spread during the Baroque period as part of the Counter-Reformation and was strictly functional to its intentions. The faithful had to be won over by divine power; images being more powerful than the word, art was the most direct way to reach their hearts. The machines were wondrous things, offering a complete experience, with lights, sounds and perfumes. In two frames, placed at a calculated distance, the artist painted a monumental colonnade in perspective. From the front, the illusion was total, with columns identical to the real ones in the church. Francesco Saverio appeared between the columns, painted on a precisely-cut thin metal sheet. By changing perspective and observing from the rear, where the faithful could not see, the deception is revealed. The use of perspective makes the distance of a few palm-widths seem very deep. Numerous hooks on the frame sides act as candle holders. In the dark – in faint and intermittent candlelight, at a distance and from the right viewpoint – everything would have appeared suggestive and realistic. Then suddenly… magic: the saint moved! He rose slowly upwards, to where heavenly glory and the divine awaited him. 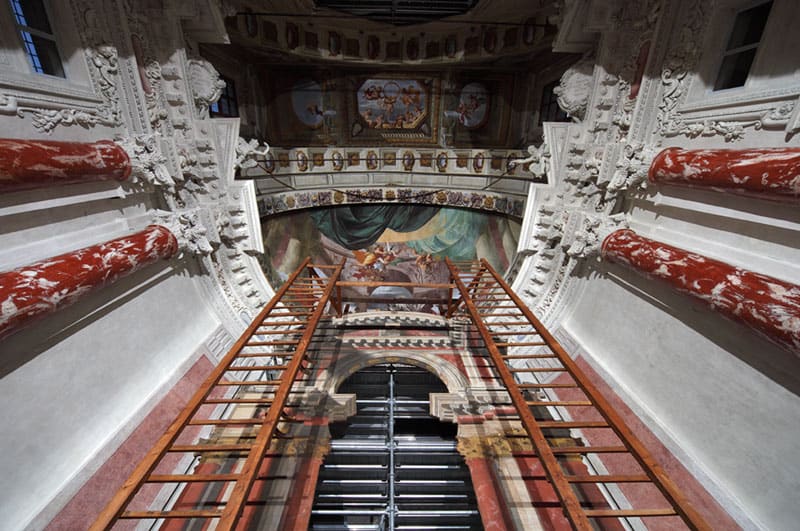